“Educate Girls, change the world”, a trip to Haiti

“Sweetheart, I need to go to Haiti for a week to learn more about how educating girls can change the world.” A long pause ensues, as tears well up, and for a brief second I fantasize that they were for me- my safety or being missed…not remotely close…“I want to go-too!,” she proclaims.

I know how to close a deal, big multi-million dollar deals. On this particular Sunday evening, the deal I aim to close is more important than most. As I sit down with my beautiful and very pregnant wife, I mentally rehearse the pitch, then deliver. First, lay the foundation, then build the critical selling points and ask for the business, “Sweetheart, I need to go to Haiti for a week to learn more about how educating girls can change the world (more on that later).” A long pause ensues, as tears well up, and for a brief second I fantasize that they were for me- my safety or being missed…not remotely close…“I want to go-too!,” she proclaims. With an 18 month old daughter and another baby on the way, she knows it’s not possible. I close the deal. Two weeks later, I‘m en route to one of the least understood and most poverty stricken countries on the planet.

Half asleep in the Hotel lobby of my last day in Haiti, as mosquitoes nip at my feet, my ride to the airport doesn’t show, and “tummy bug” begins to take its course, I struggle to define my experience personally, let alone put it into words. Something so rich and meaningful, so physically and emotionally draining, I know my puny words will not suffice. Regardless, I try to reach deep but bottom out quickly; so, I settle – amazing, disheartening and inspiring – my story about two Roses. 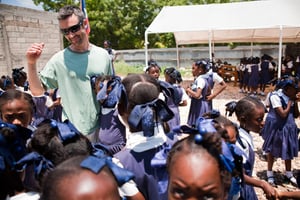 Amazing for so many reasons. Not because Haiti is so different from the US, and it is in big and some obviously ugly ways, as I’ve traveled to many remote non-Western places, like India, Egypt, China, Zimbabwe, Botswana and my personal favorite North Korea. Amazing because my quest – to better understand why educating girls in the Third World is so important – is led by a talented, accomplished, Academy Award nominated documentary film making crew from The Documentary Group.

We are in Haiti to shoot a documentary film called “10×10” about the power of educating girls in the Third World. The film that aims to bring awareness to the fact that educating girls in the Third World dramatically improves the well-being of their families, communities, and countries. Educated girls become women who are less likely to contract HIV/AIDS or be victims of domestic violence. On average, they earn more money, are more likely to participate in politics, and have fewer and healthier children. For the capitalist in us all, it grows the GDP of a nation on average of +3% (more facts). And, at the heart of 10×10 is a feature film that is being produced to tell the stories of 10 extraordinary girls from 10 developing countries around the world – Haiti being one. These stories, written by an acclaimed female writer from the girl’s country and narrated by a celebrated actress, will describe a unique personal journey of triumph and achievement against incredible odds (details on the film and the cause: www.10x10act.org).

Even more amazing because I experienced a real, multifaceted and unadulterated view of Haiti and its people. My view came through an incredibly seasoned 20-year veteran country director of Plan, one of the most successful NGOs on the planet, two knowledgeable semi-local Haitian directors who connected us to the right people every step of the way, an elite foreign serviceman stationed in Haiti equipped with a real insider’s view of their history. And last, our translator Mitchelle, who is a local Haitian hero. A pastor to over 100 who has led her community through the earthquake that killed over 60 on her street alone.

Lastly, but most amazing, were the girls. Despite the odds, hardship and incredible journeys, they were strong, proud, confident and spirited in a way that was simply beyond their years. Much more on that shortly.

Disheartening for some obvious and not so obvious reasons. The country itself is broke and broken, has very little governance as a whole, almost no commerce, no real education system (> 80% of those in school are in private school), zero waste removal system (just image the worst and double it), corrupt “business monarchs” who sap the riches of the country, corrupt politicians, and that’s just the country of Haiti. The people are very poor, most are unemployed and many believe the vast majority are purposely kept uneducated, make <$300 dollars a year, fight hard to prevent contracting AIDS, malaria or cholera, have little opportunity to complete primary education, and not to mention the practice of child slavery, called “Restavek,” is alive, well, and legal. Lest I mention the earthquake in which the Haitian government reported an estimated 316,000 people died, 300,000 were injured and 1,000,000 were made homeless (wiki). Ironically, the overwhelming burden of Haiti, the community and family rests on the shoulders of the over-worked, disrespected, abandoned (70+% are divorced) and routinely physically abused females of Haiti. They are the backbone of this country, often referred to as “mat de tente” or “tent poles” of Haiti.

We listened intently to the incredible stories of over 50 girls, ages 7 to 16. I found the stories of two Roses most revealing.

Inspiring. At the risk of sounding dramatic, I believe describing these girls as inspirational is a significant understatement. And here’s why, it would be easy to tell the “Sally Struthers – Save the Children” story of tragedy and despair, but that doesn’t capture the true essence of who these girls are. Sure, we heard numerous accounts of; rape, hunger, mental & physical abuse, disease, slavery, death – lots of death and more, but they didn’t dwell on it and neither did we. It is a part of who they are and has shaped their world view, but it does not define who they are and more importantly who they will become. 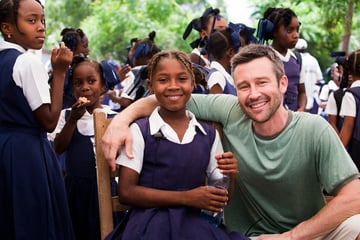 The first Rose, also known as Kentia, was noticeably well dressed, determined and supremely confident. Exuding maturity beyond her 16 years, I began to wonder if, with such emotional and intellectual intelligence, she would be the next finance minister of Haiti. Over the course of a half an hour Rose articulated a vision for her future that sounded more like a graduate student then a 16- year old girl. But my most memorable interaction was the conversation that ensued when we asked her if she wanted to marry. Interrupting us, she asked us why? Why would she want to marry and have children with a man that would likely leave her and physically abuse her? As she gestures with her hands to signal, look and listen, do you see and hear? Her retort was so strong as to suggest what a silly question. She goes on to state, why would she jeopardize her future and do anything to distract her from finishing school, becoming a nurse and achieving what she believes is well within reach. It is clear, at 16 Rose is already a strong woman. Before we finish, Rose asks us if she can recite a poem which she has written. She proceeds to deliver powerfully, a message that demonstrates her deep faith in God and determination to succeed, to be more than what seems destiny for most.

The Second Rose, Rosematrie reminds me of a younger, more gritty version of Shirley Temple. She is spirited, outspoken and nothing short of smiling-lively. Rosematrie is 9 but seems to navigate the world as most would at 29. She comes from a family of four sisters and one brother. She lives with her siblings, mother and grandmother. Rosematrie is embarrassed to tell us that she often goes hungry which makes the mile+ walk to school on an empty stomach challenging. Yet she simmers to tears when explaining her biggest concern, the fact that she doesn’t believe her mom will be able to afford school beyond the current semester. And, then it hits me hard- a ton of Haitian bricks. Here is a girl that lives in a home that is no more than 300 square feet (which we later visited that day) with six adults and two children, is constantly fighting for her next meal and her Dad left her for no reason at the age of seven. But, her breaking point is the fact that she believes her education may be coming to an end. Out of this first world.

Beyond these incredible stories, I find myself contemplating one more facet of this trip that has profoundly shaped my view on the world. It starts with the fact that these girls have no sense of entitlement to anything, even a meal. I don’t believe “entitlement” even translates in Creole. Heck, education is considered a luxury. Yet they all seem willing to put this basic element of human evolution above all others. Personally, growing up in a world where entitlement is overly abundant and school is almost considered a nuisance, this mindset is hard to comprehend. Only days later do I really awaken to this realization. Then, when you think you have heard it all, you peel it back one more layer and learn that they do this, yes to better themselves, but more so to pay it forward. The overwhelming majority dream of finishing school to become a teacher or a nurse to help others- those that need so much help. The dedication, lack of entitlement and selflessness that we immortalize in some of our most revered leaders and activists, is omnipresent in girls who are not old enough to drive. I began to realize that if we gave these girls 1/10th the opportunity of those in the first world, they would do 10X more with it. This idea became my own personal 10×10 epiphany.

I share this trip with you not to inspire, ask for donations or to evoke pity, but to simply bring awareness to a reality that many simply do not know. Yes, educating girls in the Third World will obviously help them, their families, their communities and their country. But the fact is, ironically it helps us, it helps you.
When we educate girls in the developing world we help to grow their economies, which is good for our economy- your wallet and mine. This is why some of the largest capitalists in the world, companies like Cisco, Intel and Goldman Sachs, are investing in girls education.

I share this story to ask you share these facts. Educate others about the need for girls’ education. Let the Roses blossom. 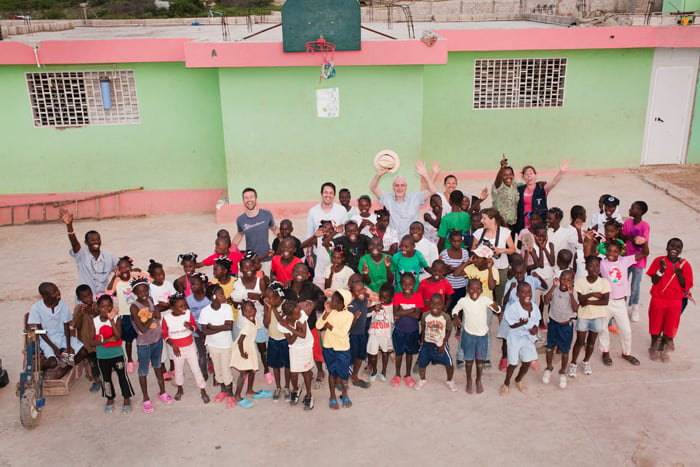 Building your marketing plan doesn’t have to be a daunting task. As with any business plan, it is...
Read More

One of the most common and difficult to solve issues B2B marketers face is proving the outcome of...
Read More

Driving the B2B World Forward with Digital: A Conversation with Thad Kahlow | BusinessOnline

Next week sees B2B marketers from across the nation coming together in Chicago to discuss best...
Read More